God’s Faithfulness to Abraham and to Us – Part 2

The Bible gives us Abraham as an example of faith. And it teaches us that true believers are marked by a life of obedience to God’s word.

So Abram went, as the LORD had told him, and Lot went with him. Abram was seventy-five years old when he departed from Haran. And Abram took Sarai his wife, and Lot his brother’s son, and all their possessions that they had gathered, and the people that they had acquired in Haran, and they set out to go to the land of Canaan. When they came to the land of Canaan, Abram passed through the land to the place at Shechem, to the oak of Moreh. At that time the Canaanites were in the land. Then the LORD appeared to Abram and said, “To your offspring I will give this land.” So he built there an altar to the LORD, who had appeared to him. From there he moved to the hill country on the east of Bethel and pitched his tent, with Bethel on the west and Ai on the east. And there he built an altar to the LORD and called upon the name of the LORD. And Abram journeyed on, still going toward the Negeb. (Genesis 12:4-9)

In verses 2 and 3, we read that God gave promises to Abram, and his obedience shows that he believed the Lord and His word.

In the same way, the Bible tells us that salvation and covenant blessings are ours because of Jesus’ life, death and resurrection (Romans 5). Like Abraham, we must cling to the Lord’s promises by faith. And we must live out our faith by obeying God’s word, because true faith is known by its fruit (Matthew 7:16-20; James 2:14-19). 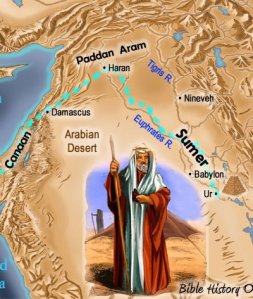 By faith and in obedience to God, Abram left the idolatrous and rebellious world of Ur and Haran. But the promised land was also a place of idolatry and rebellion.

We read in Genesis 12:6 that Abram “passed through the land to the place at to the place at Shechem, to the oak of Moreh.” The term “the place” seems to indicate that a Canaanite shrine was there. Then, we read in verse 7 that Abram “built there an altar to the LORD.” This means that he kept himself separated from the idolatrous and rebellious world of Canaan. In a land of sin and darkness, he remained pure and loyal to God and worshiped Him alone.

By faith and in obedience to God, Abram lived as a stranger in the promised land.

In the same way, as Christ believers, we are “strangers and pilgrims” on earth (1 Peter 2:11, KJV). This fallen world is not our home; we are just passing through. While waiting for the Christ’s second coming, we live a life of obedient faith before the Lord.

Now, the last sentence of Genesis 12:6 reads, “At that time the Canaanites were in the land.” We sense in that statement that the people of Canaan were not just idolatrous. They were hostile and dangerous. This fits well with what we read in the next verse: “Then the LORD appeared to Abram and said, ‘To your offspring I will give this land.'” God encouraged and strengthened Abram by confirming and even adding detail to His original promise to him in Genesis 12:2.

Brothers and sisters in Christ, the Bible teaches that our fallen world is hostile to God and His people (Genesis 3:15; John 15:19). But from Genesis to Revelation, God gives and confirms His promises to us, and they strengthen us more than anything. And it is by clinging to them, in the thick and fury of the temptations and tribulations of the world, that we persevere in the “hard and narrow path” of our Christian pilgrimage. 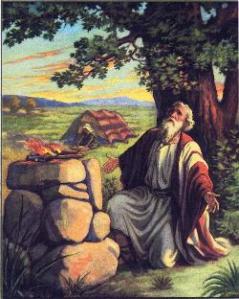 Last but definitely not the least, we recall from Genesis 12:7 that, in response to God’s confirming His promise to Abram, our father of faith worshiped the Lord in the land of the hostile and idolatrous people of Canaan.

In the same way, as recipients of His glorious promises in Christ, we are to be loyal and faithful worshipers of the living God.

a. Worship is “calling upon the name of the Lord.”

It is our expression of total dependence to our Gracious Creator and Faithful Savior, especially when when we are vexed by various trials and tribulations in the world.

b. Worship is our witness to the world.

I am sure that Abram’s altars were the only ones in Canaan that did not have idols and images in them. Now, that definitely caught the attention of the local people, who were all idolaters. It made them think, “Look what we have here – a worshiper of the unseen God!” Without a doubt, Abram’s “idol-less” altars sent a thousand messages to the minds of the Canaanites.

Biblical worship sends a strong message to the world. It confronts them with God’s truth. By it, we make our stand clear to everyone around us. It is basic and key to the execution and advancement of our Christ-commissioned task of evangelism and missions.

“No commentary is provided, but it is clear that Abram is presented to the reader as a paragon of faith and obedience. God speaks and the narrator speaks, but Abram is silent. He leaves Haran ‘not knowing where he is going.’ Only the departure and arrival of Abram’s odyssey are highlighted.” – Victor Hamilton

“Leaving homeland and family was a much greater decision in a traditional society than in today’s mobile, individualistic culture. Abram risked everything he held most dear to obey God’s call. Christ similarly challenges people to venture everything  to follow him (Matthew 10:37; Philippians 3:8).” – Gordon J. Wenham

“There is force in the contrast between ‘pitched’ and ‘builded’, the one for himself, the other for God. the only structures he [Abraham] left behind him were altars: no relics of his own wealth.”- Derek Kidner

“For since the inheritance of the land was specially promised to himself, and would only belong to his descendants, for his sake; it follows, that the land, in which he was so ill and inhumanly treated, was not set before him as his ultimate aim, but that heaven itself was proposed to him as his final resting-place.” – John Calvin